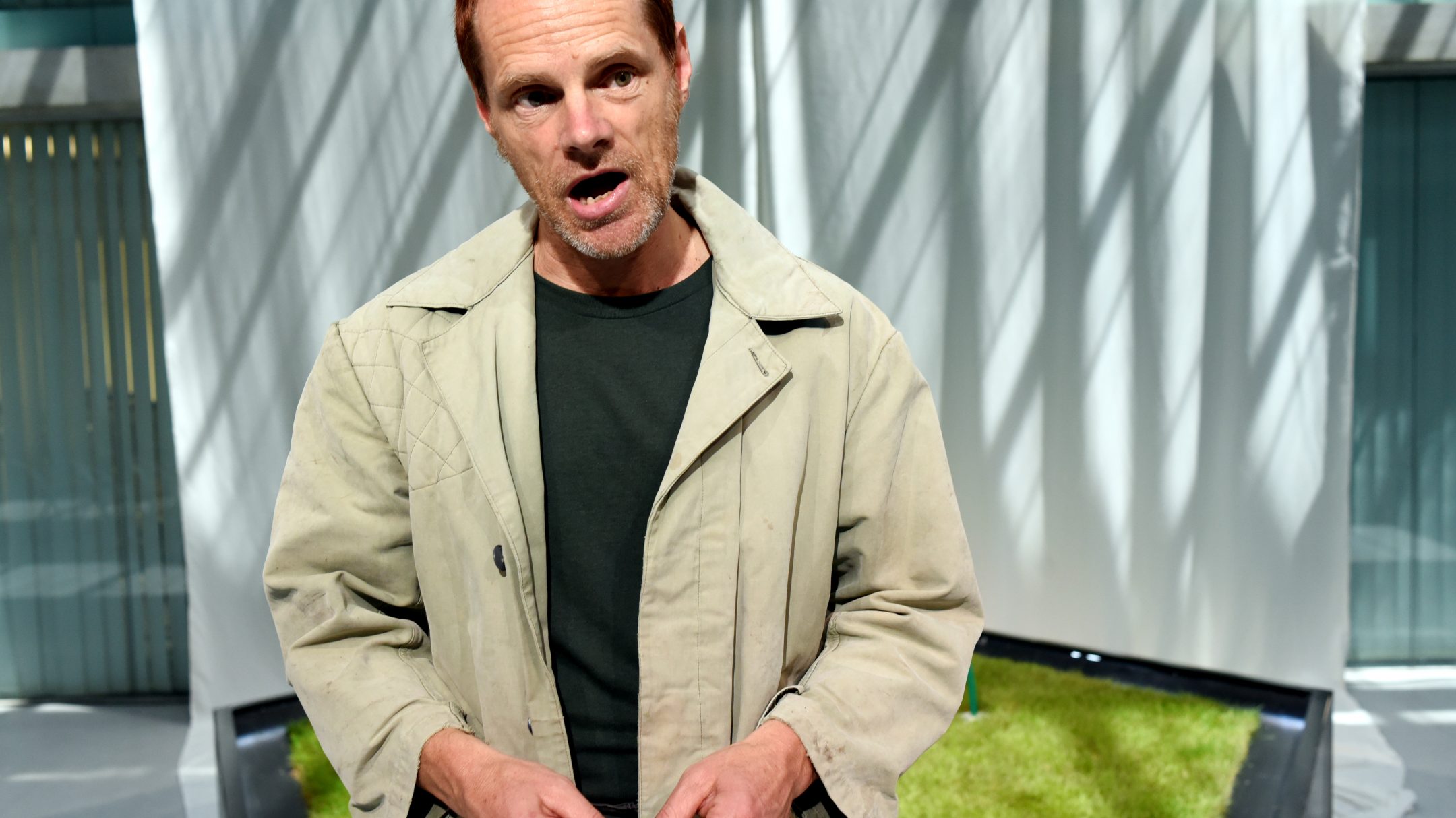 The potential, the joy, and the open communication structure of contemporary art in public space: 4 more days of the top notch cultural program in Perg-Strudengau!

HIGHLIGHTS OF THE LAST FEW DAYS

Who Killed My Father? PREMIERE “FATHERS” – an evening in two parts
Who Killed My Father? “Fathers,” an evening in two parts, celebrated its debut performance at the Technologiezentrum Perg on July 3rd. Two outstanding pieces of French literature of the new era that get under your skin were joined together on this impressive evening. In keeping with the Festival topic of “social warmth,” the production, directed by Gerhard Willert, presents the consequences of the contrary, the question of “how does a world without social warmth look?” The expansion of neoliberal politics has caused the development of a new precariat. In “Who Killed My Father,” Édouard Louis – working class rising star of French literature – sues the French state for driving his father to poverty and malady. In “The Father,” award-winning writer Stéphanie Chaillou gives insight into the inner life of a small farmer, who lost his farm due to the pressures of the market. In both scripts, it is immediately visible how legislation after legislation and measure after measure get passed and pile up onto the backs of the “little guy,” and how it not only literally breaks his back and pulls the ground out from under his feet. Both scripts are representative of a political and social development that is causing turmoil across Europe – and which can also be felt in the Mühlviertel region.

OLD TERRAIN, NEW PILLARS
“How do you manage a farm in this day and age? How can it progress into the future in times of being sidelined and impacted by climate change? The artist Wapke Feenstra (NL) has selected nine farms in the region, which are characterized by new pillars and a spirit of innovation. Whether saffron cultivation or wine from beyond the classic wine regions, from tourism to diverse organic farming such as special vegetables or atypical crops – the project “Old Terrain, New Pillars” follows the motto of “show, don’t tell” and invites people directly to the farms. It shows where our food comes from. We will go to a new destination every day during the Festival with the shuttle bus from Kriegergut in Perg. The first tours have been completed: wine, saffron, renewable energy, and vegetable cultivation have been the topics thus far. The many interested visitors from both Austria and abroad received new insights into the regional agriculture and were excited about the great hospitality of the farmers they visited. The following farms will be visited in the coming days: Radlerhof Moser in Mitterkirchen, Biohof Mascherbauer in Schwertberg, Moststation Fasching in St. Nikola, and Ranftlhof in Lehenbrunn.
For reservations: https://fdr.at/project/alte-boeden-neue-standbeine/
DATES:
Thurs, July 4th| Moststation Fasching, St.Nikola
Fri, July 5th| Ranftlhof in Lehenbrunn
Sat, July 6th | Biohof Mascherbauer, Schwertberg
Sun, July 7th| Radlerhof Moser, Mitterkirchen
Thurs and Fri from 6 pm – 9 pm, departure at 6 pm from Kriegergut Perg
Sat and Sun from 3 pm – 6 pm, departure at 3 pm from Kriegergut Perg

We’ll bake the Festival into a loaf of bread
You’ve always wanted to know what takes place in a bakery? How bread is professionally baked? On Thursday, July 4th, you will have the opportunity to see how it’s done in one of the most innovative bakeries in the region. Yet again, the Winkler Bakery in Mauthausen is opening its gates to the Festival and is inviting you to a baking workshop with the artist Sarah Maria Kamleitner. The motto is: we bake our own Festival bread. This afternoon is part of Kamleitner’s project “A Ton 2.0,” which looks at the conditions of farmers.
For reservations: https://fdr.at/project/a-ton-eine-tonne/
DATES:
Thurs, July 4th | Winkler Bakery, Freistädterstrasse 9, Mauthausen

Centriphery
“It was such an experience, you absolutely have to go!” This enthusiastic recommendation refers to the art project “Centriphery,” which invites you to take part in a joint cycling performance 3 more times from July 4th, in which cycling is connected to the landscape of the Machland dam. Various locations will be navigated, making them into their stage. It consists of bicycles, wheelchairs, and other mobile vehicular devices. Between Mitterkirchen and Baumgartenberg, the participants follow the river of the landscape, the Machland dam, and can sense the changes that floods bring with them. For instance, resettlement. Loud rattling noises ring through the silence. Messages appear alongside the road, and specially designed choreography merges mobility, bodily and audiovisual art with the agricultural landscape. It is concluded with the arrival in Baumgartenberg. You are warmly invited to join us for a ride and tag along. Take your own mobile vehicle or rent a bike on site. (Reservation required!)
Dates:
July 4, 5, 6, 7th | 7 – 9 pm departure from GH Häuserer Mitterkirchen
A collaboration with Radstart St. Georgen/Gusen

CouRage
The art project “CouRage” will begin on July 4th within the Festival. The Katsdorf media artist and director Gerald Harringer traveled through the Perg-Strundegau region in advance, gathering stories from the past and present on the topic of civic courage.
BUS TOUR. During the festival, guests can go on an auditory and commemorative journey. The stories and accounts can be experienced during two-hour long bus tours through the region. The routes travel to the locations in the region that were or are sites of acts of civic courage, defiance, bravery, and of people rising up against oppression. Back at the departure location, the travelers will have the opportunity to exchange and receive more detailed information on what they have heard.
COLLABORATION. This project developed in collaboration with the artist Roswita Kröll of Radio FRO. The collected stories talk about standing up for someone, being disobedient, defying orders, defending oneself, researching, questioning, taking a stand, stating one’s opinion in public, especially in spaces where others haven’t found the bravery.
INTERVENTION. At the opening in St. Georgen/Gusen on June 28th, CouRage already made an impressive stand as it protested against the deportation of integrated refugees in an action in the presence of prominent political figures and guests.
For reservations and additional info: https://fdr.at/project/courage-2/
DATES:
Thurs, July 4th | departure at 7:15 pm
Sat, July 6th and Sun, July 7th, departure at 10:15 am from Kriegergut Perg

Festival premiere: My Jihad – A Monodrama
“We are the name we take on, but we are not responsible if someone misuses it.” “My Jihad” is a monodrama by Jihad Al-khatib. Through humor, it tells the story of a young man who was confronted with numerous challenges, due to, among other things, the catastrophic connotations the word jihad has in the West. Jihad was born in Saudi Arabia and moved to Palestine at the age of ten. In the summer of 2015, as thousands were forced to flee Syria and Iraq, traveling to Europe and other places because of the war, Jihad Al-khatib ended up in Austria. We will see Jihad on stage and will have the opportunity to accompany him on his journey.
Dates:
Thurs, July 4th and Fri, July 5th | 8:30 pm – 9:30 pm at the Stadttheater Grein
For reservations: https://fdr.at/project/mein-jihad-ein-monodrama/

Open air film screening: The Quality of Mercy at the Mauthausen Memorial – with the director present.
500 escaped prisoners of the Mauthausen concentration camp were hunted down, shot, beaten to death, and killed in savage ways by the SS, Hitler Youth, Volkssturm (home guard), and the local population of the surrounding Mühlviertel region during the night of February 1st, 1945 and over the following weeks. Andreas Gruber will show his 1994 film “Rabbit Hunt – The Quality of Mercy.”
Additional screenings on July 5th at 8 pm at the Stadtkino Grein and July 6th at 8 pm at the Kino Katsdorf.

Discussing Social Warmth: with Renata Schmidt-Kunz (AT)
Renata Schmidtkunz is one of the most compelling interviewers in the country. She will attend the Festival, conducting numerous live interviews as the journalist-in-residence for the duration of the Festival. On July 4th, she will talk with Gerhard Willert (Fathers), Tina Auer (Wärmegreißlerei), Anna Maria Brandstätter (Social Warmth in Mühlviertelese), and Walter Edtbauer (I Am a Traveler – ART.SUITCASE).
Dates: July 4th 9 pm – 10:30 pm at the Kriegergut Festival Center

Special: Take advantage of the planned tours this weekend and experience as much as possible in one day! https://fdr.at/programmtouren/