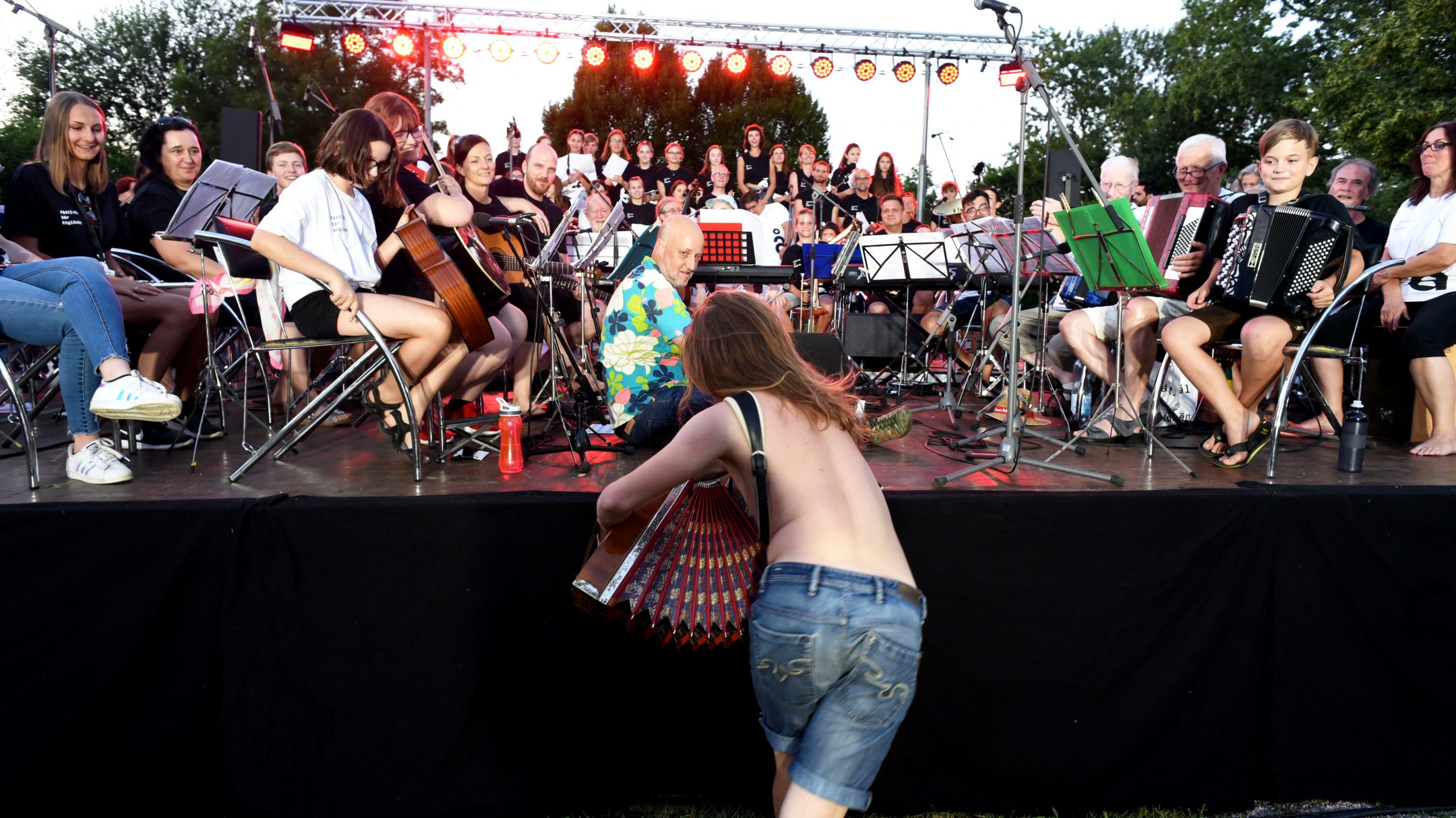 This year’s opening of the Festival of the Regions brought thousands of visitors to the Perg-Strudengau region!

The Festival of the Regions is excited about the numerous visitors that came to Perg-Strudengau for the first day of the Festival. We counted many visitors at the opening.
In the early afternoon, art lovers from both Austria and abroad came to central Perg, where numerous projects were presented in a pop-up tour and in a flashmob. Above all, though, many visitors from the region went to central Perg, because of the local populations’ great interest and curiosity for the Festival topic of “social warmth.” This was already apparent in advance: 1,362 people from Perg collaborated in 94 workshops of the art projects, making the Festival of the Regions their festival through participation.

(Space) ship launch at 4 pm by Mayor Anton Froschauer: The N.O.A.H. Galactica landed in central Perg in order to question humanity’s salvation every day during the Festival
The N.O.A.H. Galactica by Josseline Engeler (AT) landed in the Leitnerwiese in Badgasse at 3 pm with artists from Linz aboard in order to remain permanently stationed in Perg. It was officially inaugurated at 4 pm by Mayor Anton Froschauer. During the Festival, interactions, performances, exhibitions and other media inside and around the space ship will approach the question of whether or not humanity can persist through an escape into space.
Opening hours of N.O.A.H. Galactica in Badgasse in Perg: daily from July 7th: Mon-Fri: 4 pm – 9 pm, Sat-Sun: 1 pm – 9 pm 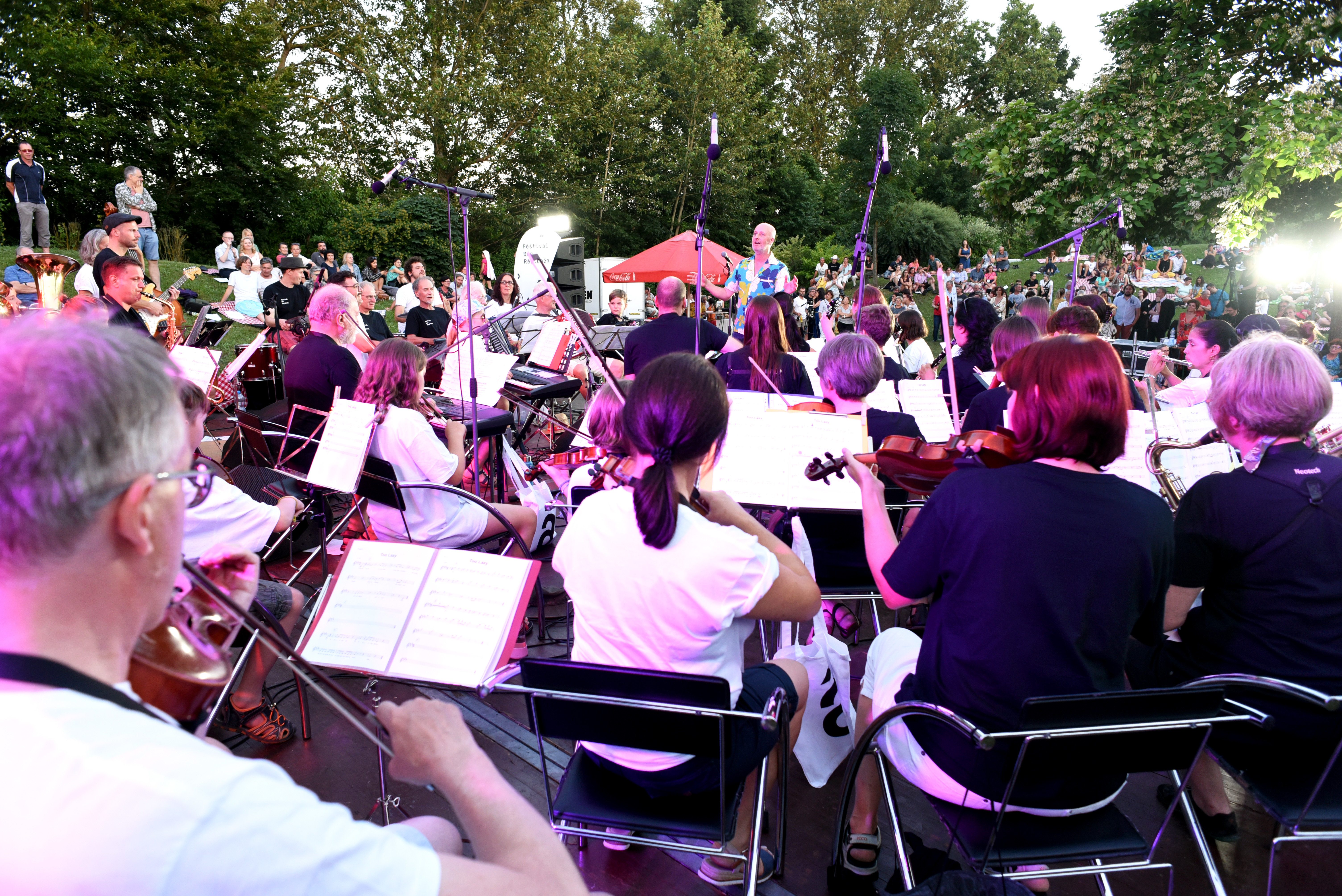 GRAND OPENING PART 1 at 5 pm welcome speeches and the opening of the new station of the Gusen Audio Path
The new station of the Gusen Audio Path by Christoph Mayer chm and Andreas Hagelüken was opened in the entrance to the Bergkristall tunnels in Gusen at 5 pm. Afterwards, speeches were held at the official opening of the Festival of the Regions 2019 by Governor Thomas Stelzer, NR Mayor Nikolaus Prinz (Chairman of the LEADER Region Perg-Strudengau), BR Mayor Anton Froschauer, Mayor Erich Wahl, Gudrun Blohberger (Mauthausen Memorial), Andrea Hummer & Airan Berg (Festival of the Regions), Christoph Mayer chm & Andreas Hagelüken (artistic design of the Gusen Audio Path).

THE BIG OPENING CONCERT OF THE CITIZENS’ ORCHESTRA WITH ONDAMARELA (PT) AND TIM STEINER (GB) LURED VISITORS TO THE FREIBAD IN PERG FOR THE MILD SUMMER EVENING ON THE OPENING DAY
The opening concert of Ondamarela and Tim Steiner presented some special moments and a big celebration of musical togetherness, which was created in collaboration with residents from the region. As a grandiose prelude, an orchestra of more than 100 residents, formed through numerous rehearsals in the months leading to the Festival, created a unique composition that warmly welcomed guests in a vocal and lively way.

Many thanks to our supporters!