Our programme board has been very busy over the last few days with around 260 submissions.
For a final selection that includes 20-30 projects, the decision-making process is not easy and, above all, needs time for negotiation!

For this reason, projects that unfortunately did not make it will be notified soon.

All other projects for which more detailed information or implementation options need to be discussed/questioned will also be contacted soon. After that, heads will be put back together…

The final decision will be announced towards the end of October

For questions regarding the call for entries, please contact Renée, our festival organiser at renee.chvatal@fdr.at. THANK YOU

The next Festival of Regions will take place from 23 June to 2 July 2023 in the region along the Summerauerbahn. Under the motto HIGH TIME the focus of the artistic works will be on questions regarding our future. Ranging from the climate catastrophe to societal togetherness. The train line Summerauerbahn will function as a geographical and topical starting point for the coming Festival of Regions. 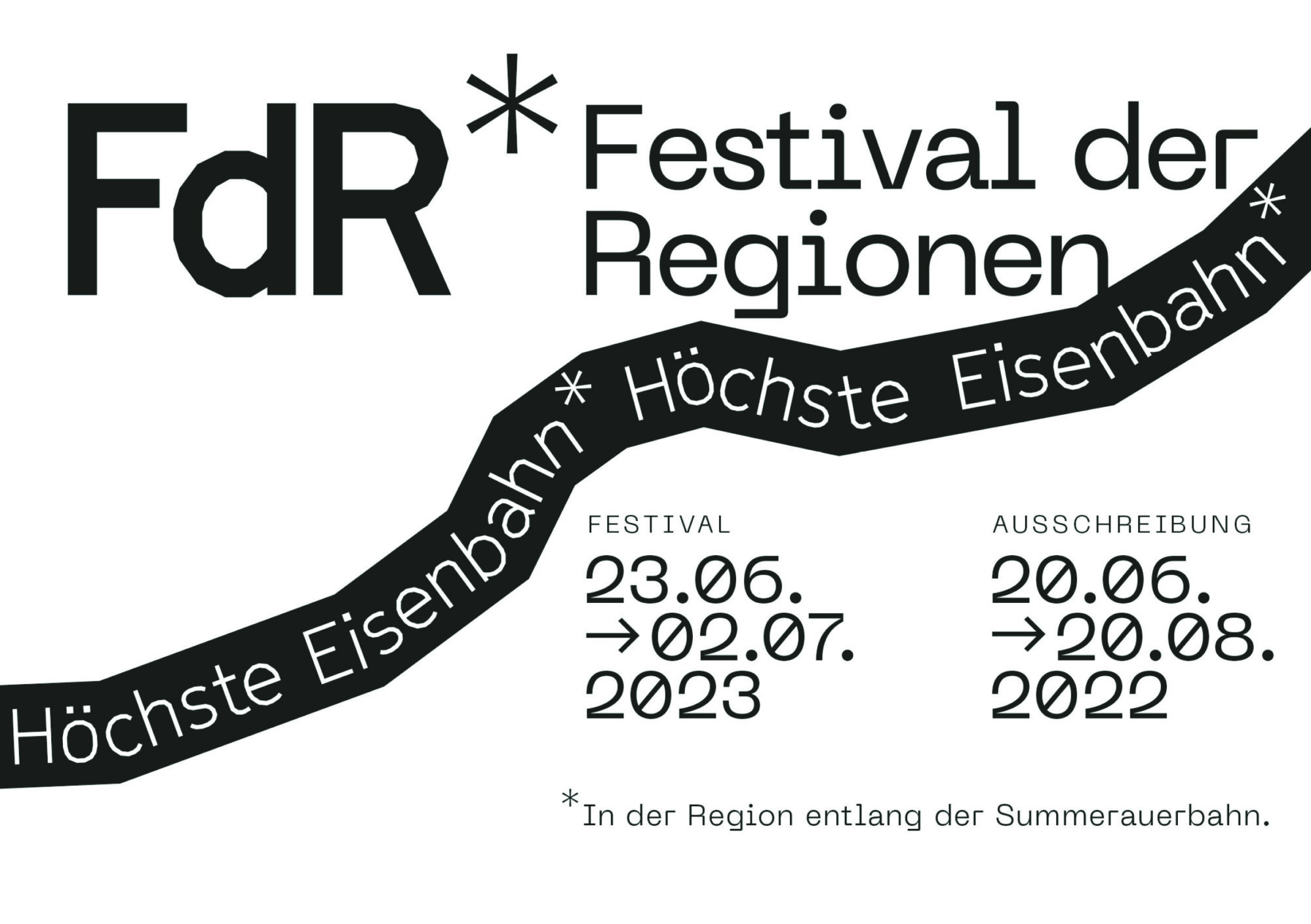 The Track as a Metaphor
For the festival edition in 2023, the train tracks – as a representative for the region – take the place of a metaphor for the great number of challenges we face. Starting from public and individual transport all the way to how we deal with resources and the borders in our minds. A metaphor for the journey, the way we design and form the landscape and our society. For the overcoming of distances. For places of encounter and of dialogue between regions, cultures, and generations. For setting out and leaving the old behind. For staying and continuing. For crossovers. For slowing down. For stopping and moving on. For something that belongs to us all. And affects us all. For a collective resource.

The Train has not yet Left the Station
But it is high time to reset the course. And high time for a change. High time to talk to each other more. To come together again. To work on the future. To break down barriers. To become more open to the contradictions and discrepancies and unconventional ways of going about things. It is high time to allow for something else.

A View from the Train Window
If you take a look out the train window you will see a landscape that is ever changing from station to station. From the central train station in Linz to the first stop in the Franckviertel, packed in between the industrial harbour, the main road, and the area of the voestalpine. An unembellished stop for commuters. Over the old bridge across the Danube onward to Steyregg and Pulgarn. The suburbs of Linz. Passing St. Georgen a.d. Gusen you go left and right through the increasingly dense residential and commercial areas. A conurbation led on by the extension of the highway, express roads and main roads, sprawls in every direction. A countermovement to the rural exodus has existed for a long time already. Traffic jams all along the roads. There would be enough room in the Summerauerbahn! After St. Georgen comes the narrow Gusental until you reach Lungitz. Undeveloped nature. And then the next levels, meadows and fields, until you arrive in Katsdorf, Wartberg and Schloss-Haus – with train stations and stops either on the margins or far away from the centres of these places. From Pregarten, over Kefermarkt along the river Feldaist to Lasberg. After around one hour of the journey: The train station in Freistadt, forty five minutes away from the city if you travel on foot. It is rumoured that the operators of the horse and carriages in Freistadt prevented a closer connection one hundred and fifty years ago. Finally you then reach Summerau and the view over the border to Horní Dvořiště in the Czech Republic.

A Region with a Special Cultural Concentration
The Mühlviertel and the region along the Summerauerbahn in particular is a place with a great number of cultural initiatives. Some of them have over thirty years of history (Local-Bühne Freistadt, Heimatfilmfestival Freistadt). These are collectives that have put a lot of work into the building of structures, places, networks, and an audience. But there are also a number of tender and promising flowers within the cultural landscape that are still developing. This special cultural concentration is the Humus for a festival that once more intends to focus on regional participation and sees itself as an impulse for more to come. Or to put it in the words of the founding generation of the festival from thirty years ago: A festival that is not a “show of achievements of what is”, but rather an occasion to break the familiar mould and create something new.

Call for Entries
This call is aimed at those people who like to roll down the windows on trains and feel the fresh air on their faces. Those who want to break out from familiar routines and get onboard with new contexts. Artists who are not afraid to cast an unabashed look on the blind spots of history, those who do drink not only Freistädter Beer but also Budweiser, and those who see the unexpected potential of that special space in time when you arrive and wait at train stations.

We are looking for art projects that are regionally specific, social, accessible, and oppositional to the region. Off from the artistic beaten paths and places, but rather in inns, on fields, in forests, brownfields and empty buildings, skate parks, or at virtual stops.

Possibilities
The Festival of Regions 2023 offers the possibility to realise creative ideas with as much artistic freedom as possible. We will fund projects with budgets aimed at smaller, medium sized, and large scale undertakings of every artistic field and discipline: From a meme-workshop in a nursing home, all the way to the abolition of combustion engines.

Call
The call for entries is open from Monday June 20 2022 until Saturday 20 August 2022. Projects can only be submitted via the online form and must be in either German, Englisch or Czech. You can find the Open Call in Czech here.

Regional Involvement
The Festival of Regions is one of the highest acclaimed contemporary art festivals. For over thirty years the festival has been exploring and conquering one region in Upper Austria after the next every two years. Besides the programmatic approach of making contemporary, critical, and at times subversive art possible outside of cultural centres, the strengthening and promotion of regional initiatives and the involvement of local individuals within the cultural processes and projects is a main focal point. For this, the festival will gladly act as an intermediary for the submitting artists.

For this festival edition we want to particularly invite initiatives, collectives, activists, and artists from the area to involve themselves with project applications and ideas. Regional initiatives that do not want to realise their own project, yet are interested in an exchange and a collaboration with artists and the festival are very much invited to contact the festival team.

Participation from the Czech Republic
The Summerauerbahn has connected Upper Austria and the Czech Republic for one hundred and fifty years. As a section of the international train service from Linz over České Budějovice to Praha, it represents not only transport, but is also a symbol for an exchange of ideas across borders. This call is therefore explicitly aimed at submissions from the Czech Republic. Cross-border, contemporary artistic projects are very welcome. A submission in the Czech language is possible.

Components of the Submission

As a rule, the budget calculations of the projects are between 500 and 20,000 euros. Contributions of own work and/or co-financing are desired. Between 20-30 projects are selected.

Local Exploration
On Friday July 22 the Festival of Regions will offer a local exploration and the possibility to gain more insight into the area and meet regional representatives together with the team and the heads of the festival.

Details on the exploration trip via bus and train, along with a tour plan and stops can be found soon on www.fdr.at
We ask for registration at: renee.chvatal@fdr.at
Participation is free of charge.

In Addition to the local exploration we are offering the possibility for an in-person as well as an online exchange for applicants and interested people from the region.

In-person on Friday 5 August from 3pm to 6pm at Cafe Suchan in Freistadt, and online on Thursday 11 August from 6:30pm to 8 pm.
More information can be found soon at www.fdr.at

Project Selection
The decision concerning the selection of the projects will be made for the first time by a program board of five people. In future the program board will be responsible for all curatorial work and will be newly appointed for every festival edition. The members of the program board for the 2023 edition are Davide Bevilacqua, Fina Esslinger, Mario Friedwagner, Marlene Hausegger, and Janina Wegscheider.

Every timely submission will be discussed and assessed.

During the selection process we will take a specific look at the level of diversity among the applicants. As a Green Event we place a particular focus on sustainable production and the use of local and regional resources. As much as is possible, we wish for an in-person presence during the festival. There is the possibility to work on-site in advance of the festival. The Festival of Regions will act as an intermediary for contacts concerning research and networking.

The final selection of projects will take place in September 2022. We are planning a first kick-off meeting with the selected projects in October 2022.

For questions regarding the application Renée Chvatal (festival organisation) can be contacted at renee.chvatal@fdr.at. Details concerning the call, dates, contacts, and continually updated information on the region can be found at www.fdr.at

General information about the Festival of Regions