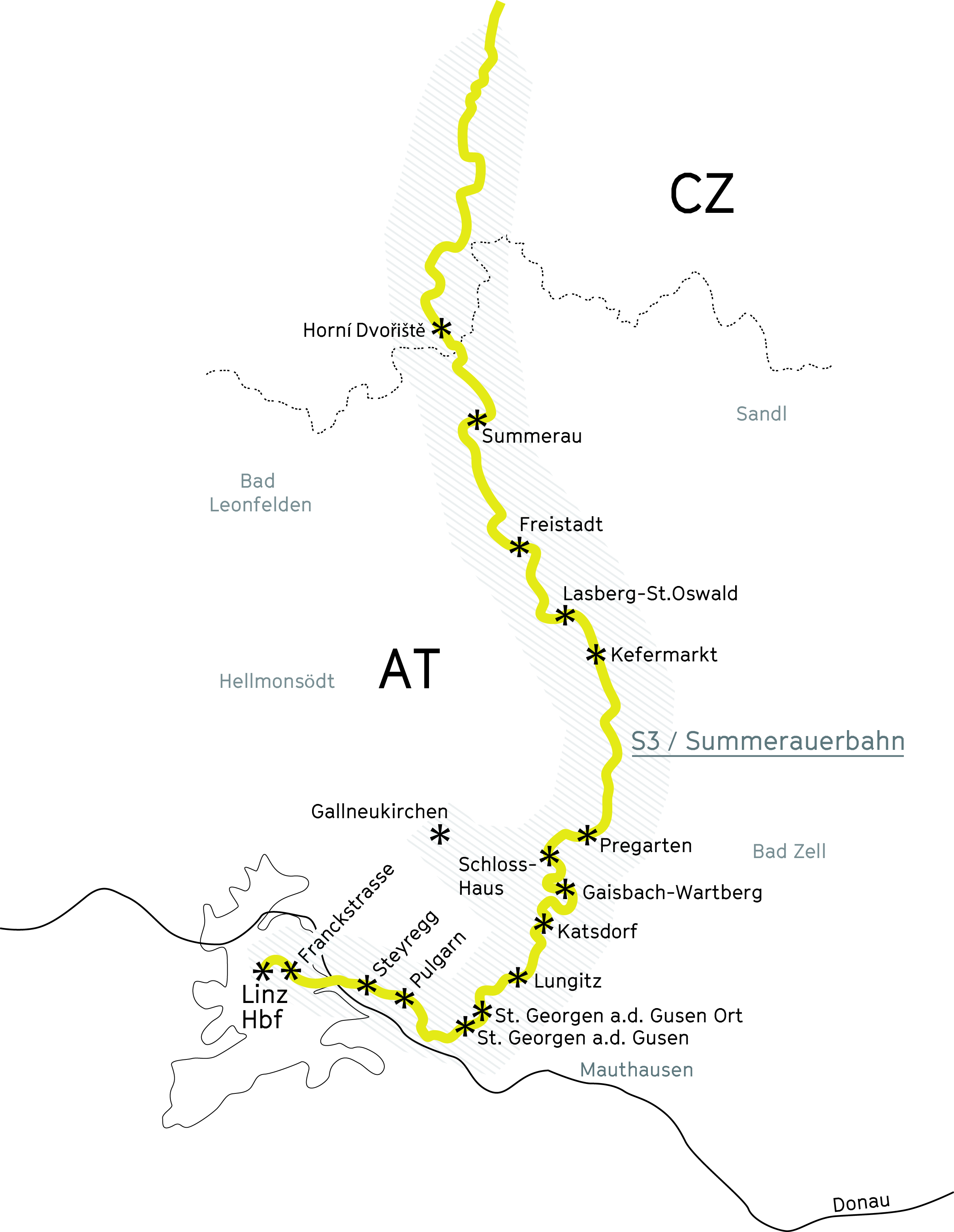 The Region along the Summerauerbahn

Research on the region

The Track as a Metaphor
For the festival edition in 2023, the train tracks – as a representative for the region – take the place of a metaphor for the great number of challenges we face. Starting from public and individual transport all the way to how we deal with resources and the borders in our minds.
A metaphor for the journey, the way we design and form the landscape and our society. For the overcoming of distances. For places of encounter and of dialogue between regions, cultures, and generations. For setting out and leaving the old behind. For staying and continuing. For crossovers. For slowing down. For stopping and moving on. For something that belongs to us all. And affects us all. For a collective resource.

A View from the Train Window
If you take a look out the train window you will see a landscape that is ever changing from station to station. From the central train station in Linz to the first stop in the Franckviertel, packed in between the industrial harbour, the main road, and the area of the voestalpine. An unembellished stop for commuters. Over the old bridge across the Danube onward to Steyregg and Pulgarn. The suburbs of Linz. From St. Georgen a.d. Gusen you go left and right through the increasingly dense residential and commercial areas. A conurbation led on by the extension of the highway, express roads and main roads, sprawls in every direction. A countermovement to the rural exodus has existed for a long time already. Traffic jams all along the roads. But along the Summerauerbahn there would be more than enough space! After St. Georgen comes the narrow Gusental until you reach Lungitz. Undeveloped nature. And then the next levels, meadows and fields, until you arrive in Katsdorf, Wartberg and Schloss-Haus – with train stations and stops either on the margins or far away from the centres of these places. From Pregarten, over Kefermarkt an der (along the river) Feldaist to Lasberg. After around on hour of the journey: The train station in Freistadt, forty five minutes away from the city if you travel on foot. It is rumoured that the operators of the horse and carriages in Freistadt prevented a closer connection one hundred and fifty years ago. Finally you then reach Summerau and the view over the border to Horní Dvořiště in the Czech Republic.

A Region with a Special Cultural Concentration
The Mühlviertel and the region on the Summerauerbahn particular is a place with a great number of cultural initiatives. Some of them with over thirty years of history (Local-Bühne Freistadt, Heimatfilmfestival Freistadt). These are collectives that have put a lot of work into the building of structures, places, networks, and an audience. But there are also a number of tender and promising flowers within the cultural landscape that are still developing. This special cultural concentration is the Humus for a festival that once more intends to focus on regional participation and sees itself as an impulse for more to come. Or to put it in the words of the founding generation of the festival from thirty years ago: A festival that is not a “show of achievements of what is”, but rather an occasion to break the familiar mould and create something new.

Regional Involvement
The Festival of Regions is one of the highest acclaimed contemporary art festivals. For over thirty years the festival has been exploring and conquering one region in Upper Austria after the next every two years. Besides the programmatic approach of making contemporary, critical, and at times subversive art possible outside of cultural centres, the strengthening and promotion of regional initiatives and the involvement of local individuals within the cultural processes and projects is a main focal point. For this, the festival will gladly act as an intermediary for the submitting artists.

For this festival edition we want to particularly invite initiatives, collectives, activists, and artists from the area to involve themselves with project applications and ideas. Regional initiatives that do not want to realize their own project, yet are interested in an exchange and a collaboration with artists and the festival are very much invited to contact the festival team.

Research on the region (excerpt; will be continuously supplemented)

No, there is no specific characteristic of the Mühlviertel population. No folk character. Nothing that distinguishes this breed from all others.

Those times – if they ever existed – are over. Globalisation, urbanisation of rural areas, the education offensive of the 1980s, or whoever you want to blame for it, have done a great job. The current area of the Festival of the Regions 2023 is also part of the unification of the world, as the Islamic scholar Thomas Bauer titles a booklet he wrote (Reclam Universal-Bibliothek No. 19492). In it, he laments the loss of ambiguity and diversity in the world. A clever and amusing book to read. Nevertheless, I would (also) like to disagree with Bauer.

One thing I notice again and again is that people are shaped by their respective life situations. These are certainly not genuinely Mühlviertel influences. But they are the result of the availability or non-availability of opportunities in life, culture, education or work. People in the countryside are used to having to create many things for themselves and make more of an effort than people in the centres. Long commutes, fewer educational opportunities, holidays or weekends full of work are a matter of course for them. It is taken for granted because it affects everyone in the village or small town. That’s why they don’t complain. Life means creating, grappling and making an effort. And they are good at that.
Whoever gets involved with these people must not be a poser or a talker. You can only win their respect and affection if you know how to get things done yourself and keep your promises. There is no time for empty talk and vanity here. But if you can inspire them for your own cause, then you have reliable and competent people at your side who are willing to invest a part of their life’s energy in a common project.

But this privilege does not come as a gift. You have to earn it.

Built about 150 years ago to connect the regional economic centres of the Austro-Hungarian Monarchy Linz and Budweis/České Budějovice, it was probably never the intention of today’s Summerauerbahn to publicly connect the north-eastern Mühlviertel to the central region of Upper Austria.

The fact that hardly any villages along the Summerauerbahn are actually connected to the railway line with a station directly in the village, in the town, probably corresponds to this originally non-existent claim. The Summerauerbahn is nevertheless suitable for identification: the people living along its course have in common that the railway is somewhere nearby, but hardly usable in everyday life. Motorway and highway dominate as routes.
The realisation that 150-year-old transport infrastructures do not (or cannot) meet the changed and developing demands on mobility is imposing.

In this case, the railway line as a connecting element between the central region and within the province remains a bitter utopia – bitter because it is tangible. The tracks have been laid, the stations built, the timetables written. And the trains are running. But sometimes into nothing, through nothing and for nothing.

Historical background to the region
by Dr. Hubert Roiß (founder and long-time chairman of the Mühlviertler Museumsstraße)

Links to the railroad (in German language)
https://de.wikipedia.org/wiki/Bahnstrecke_St._Valentin–České_Budějovice

Gallery – Trainstations – in the station sequence starting from Linz

Please have a look at the German page under > Region – Gallerie. THANK YOU!