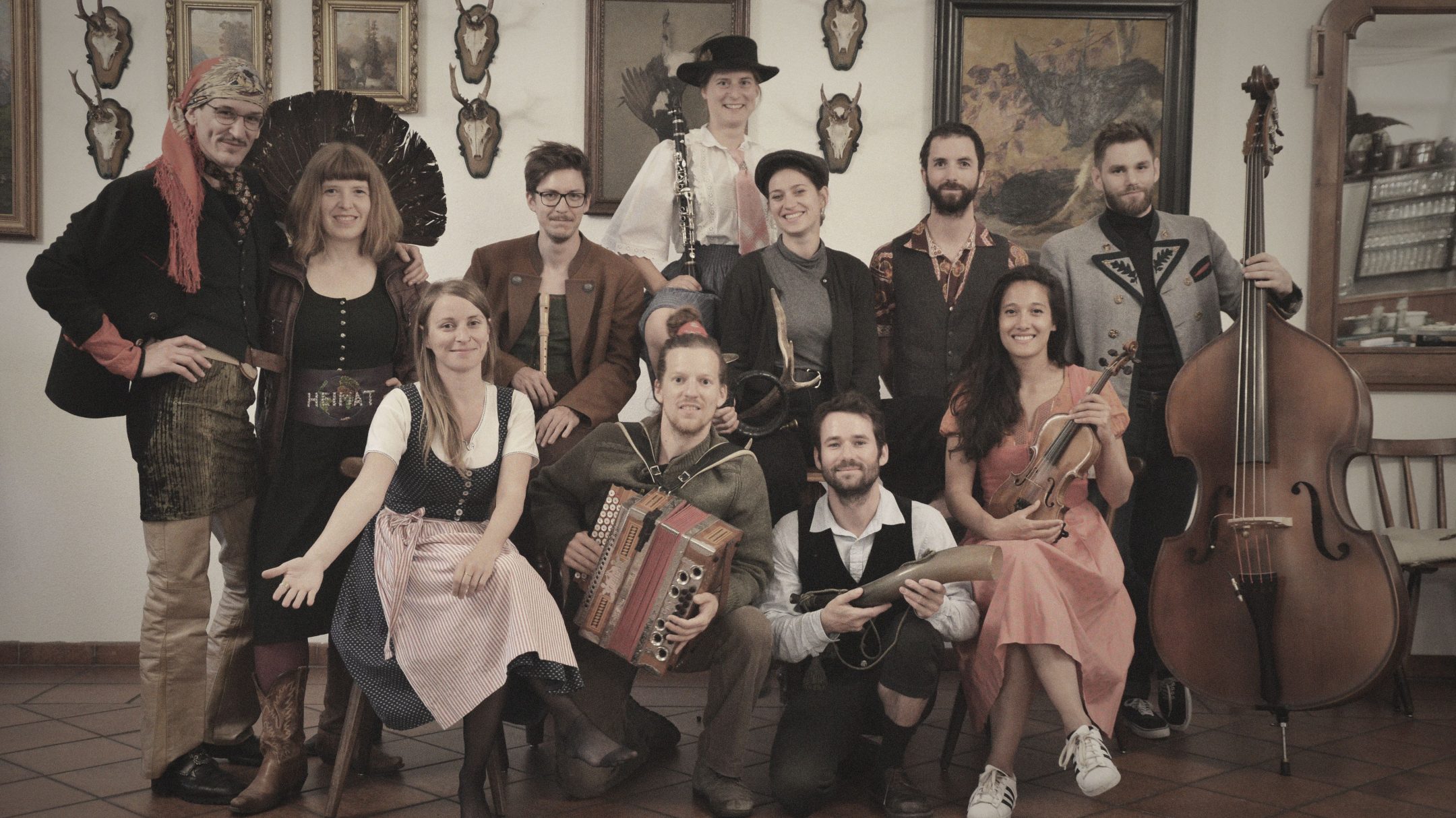 In an atmosphere that playfully revitalizes traditional cultural assets such as folk dance, folk music or traditional garb, declaring them to be fields of experimentation, we will celebrate, dance and approach folk art as a space for freely developing creative expression. Highlights of the evening will include folk music ensemble “Aasgeiger”, regional Schuhplattler dancers, a hip hop and folk dance off, gregarious round tables, and the Quetschenteufel&Kuschelkrampus. Some artists and visitors present their traditional costumes, especially created for this evening. At the bonfire, which will be heated up by BandAdriatica, stories will be told about Jägerwirt and his innkeeper, about Dirndl dresses from the Jewish traditional garb manufacturer Wallach, and many more.

The Volxfest welcomes people of all backgrounds, all genders, all sexual (non-)orientations, in all forms of (non-)relationships and with all forms of bodily distinctions. Being different is normal!

The interdisciplinary Volxfest team – led by Teresa Distelberger and Simon Mayer, and consisting of artists, dancers, musicians, and performers, along with local heritage clubs – invites you to the Volxfest at the Gasthaus Jägerwirt. In an atmosphere that playfully revitalizes traditional cultural assets such as folk dance, folk music or traditional garb, declaring them to be fields of experimentation, we will celebrate and dance, and approach folk art as a space for freely developing the creative expression of the people. On this participatory evening, which will blur the borders between participants and artists through a finely tuned choreography between concerted impulses, fluid improvisation, and authentic involvement, traditions and customs will be redefined.

Highlights of the evening will include folk music ensemble “Aasgeiger,” which will get us on the dance floor, regional Schuhplattler dancers, a hip hop and folk dance off, gregarious round tables, and the Quetschenteufel&Kuschelkrampus. From time to time, people may shout out for a double liter, adore or sing to it in unusual ways. Some artists and visitors present their traditional costumes, especially created for this evening. At the bonfire, which will be heated up by BandAdriatica, stories will be told about Jägerwirt and its innkeeper, about Dirndl dresses from the Jewish traditional garb manufacturer Wallach, and many more.

The artists from the Volxfest project spent several weeks in the region preparing by researching local customs, traditions, and rituals as well as getting in touch with people from the area. Volxfest is organizing various dance, traditional garb, and discursive workshops on the topics of tradition, present-day customs, and people’s connectedness to their homeland. Thus, the Volxfest will be a unique kind of folk dance ball and traditional garb festival, one that is homeland-connected yet cosmopolitan, down-to-earth yet experimental, and both traditional and up-to-date. Seeming contradictions will be brought to the dance floor at the Volxfest.

Three evenings when the public is invited to meet the Volxfest team, to chat, dance together, make music together, and warm up for the Volxfest on July 6th.  Each table will deal with a different theme.

The Dance Hall workshop will predominantly deal with the joys of dancing and singing together. We will practice and playfully reinvent existing folk dances, Schuhplattler dances, and songs. We’ll get to the bottom of the question of folk dance’s origins and will try to approach these origins through different experiments. Elements from folk dances and songs from other cultures as well as hip hop will also be incorporated. This afternoon is for anyone who enjoys folk dancing and singing or who would like to learn, as well as those who like to experiment, for all those who do not see themselves as dancers/singers or who don’t have anything to do with folk dancing and singing. Everyone is welcome.

In collaboration with the headdress and traditional garb groups of the Perg district. Traditional garb is often seen as the uniform-like clothing of a particular region. What does it mean to find an individualized version of one’s own traditional garb in which other roots or affiliations can become visible? How can a headdress look in which inner wealth beyond money or gold can be expressed? What is possible if seemingly contradictory styles are combined in an unusual but meticulous way? Traditional, urban, quirky, transgender, multiculturally mixed – anything is possible and will be tried out. This playful approach to one’s own understanding of homeland will be grounded in subtle, deep-rooted conversation techniques. It is thus not unlikely to find unexpected nutrients in your own home’s soil. Even if – or perhaps precisely when – the word homeland itself brings up a sense of dread.

Simon Mayer and Teresa Distelberger are the artistic directors of the Volxfest project. They work on the topics of homeland and tradition in newly interpreted forms – be it dance, music, traditional garb, or cultivation of the art of conversation.

Simon Mayer is a performer/dancer, choreographer, and musician, raised in Andorf/OÖ, with roots in dancing that range from the national Staatsoper ballet to PARTS Brussels to domestic folk dance groups. www.simonmayer.at

Teresa Distelberger is a filmmaker, moderator, and artist, raised in Herzogenburg/NÖ. She researches on collective trauma, loves paradoxical Dirndls, and creates spaces for encounters. www.artofco.com

Performance, research, interaction with the Audience and creative support:

A Co-Production of Kopf hoch & Festival der Regionen. Supported by the Cultural Department of the City Vienna, the Federal Chancellery of Austria and the Flemish Government.