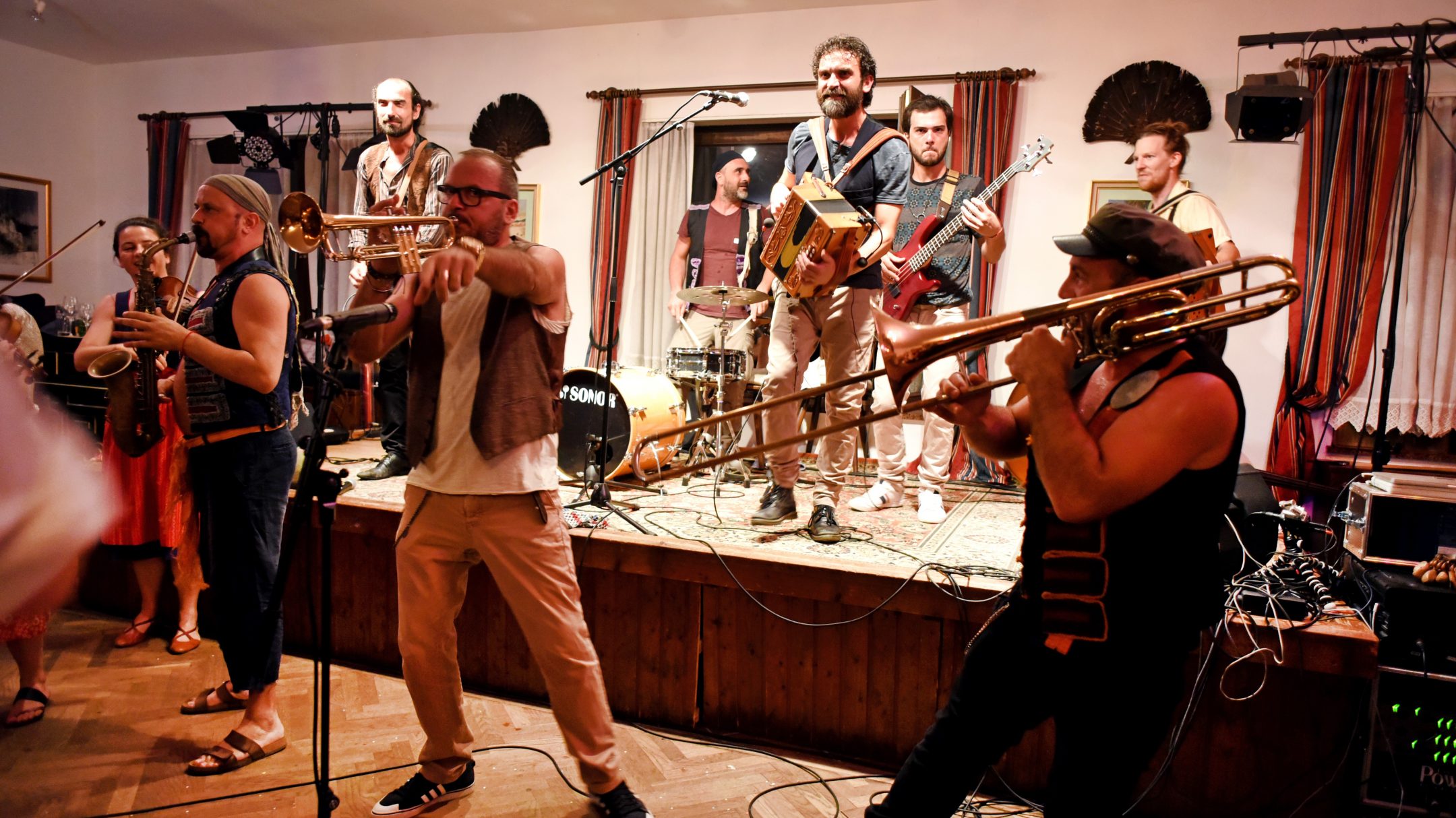 The Volxfest – A Special Kind of Folk Art Ball
What happens when you try and playfully revitalize cultural artifacts such as folk dance, folk music, and traditional garb and declare them as a space for experimentation? We’ll see what happens on Saturday: the artist group “Volxfest” invites you to take part in a special kind of Folk Art Ball as part of the Festival of the Regions. We will celebrate, dance, and stretch and expand “folk art” in all directions. Clear outlines will be replaced with the unbounded unraveling of creative expression. Teresa Distelberger and Simon Mayer of the Volxfest team invite you to join them at noon to participate in the friendly get together for mixing old and new at workshops and dance performances where Schuhplattln merges with hip hop. The pinnacle of the evening will be the folk music ensemble “Aasgeiger” – which will get you dancing – the Schuhplattler dancers of the region, a hip hop and folk dance battle, gregarious round tables, and the Quetschenteufel&Kuschelkrampus. Artists and visitors will present the traditional garb that they specially created for this evening. At the bonfire, which will be heated up by BandAdriatica, stories will be told about the Jägerwirt and his innkeeper, about Dirndl dresses from the Jewish traditional garb manufacturer Wallach, and much more.
DATES:
Sat, July 6th afternoon program starting at 12/noon,
Evening program starting at 7 pm, at Jägerwirt in Au an der Donau

Last chance: Fathers
Who Killed My Father? You have one more chance to see actor Theo Helm as he depicts the downfall of a worker and a farmer, embodying them precisely and making their experiences tangible. “Fathers,” directed by longtime director of the Landestheater Linz, Gerhard Willert, bears the brunt of the impact of neoliberal politics. The radically minimal stage design of Alexandra Pitz lends the play a lot of room for spectacle. And Wolfang Fadi Dorninger’s music amplifies the experience. “Fathers” – an evening in two parts will be performed at the  Technologiezentrum Perg, using the scripts from “Who Killed My Father?” by Édouard Louis (FR) (Austrian debut reading) and “The Father” by Stéphanie Chaillou (FR) (German-language debut reading).
DATES – LAST PERFORMANCE:
Sat, July 6th, 8:30 pm – 10:15 pm at the Technologiezentrum Perg

cloth_ing
Once again, the joint weaving of textiles and personal stories by visitors and a group from the University of Applied Arts Vienna is the focus of the last web workshop at the Hauptplatz Grein. The festive conclusion to the project, which has spanned over several days, will culminate in a performative reading in the evening at the historical Stadttheater Grein. Textile and linguistic elements, which were collected on the journey along the Danube from Mauthausen to Grein, will be brought into the theater space. The different atmospheres of the visited locations intertwine here on multiple levels.
DATES:
Sat, 4 pm – 7 pm Grein Stadtplatz
8:30 pm – 9:30 pm Grand finale at the Stadttheater Grein

Hike: “The Quality of Mercy”
On Sunday, July 7th, the hike with director Andreas Gruber to the sites of the “Rabbit Hunt” will take place for the second time. Despite the extreme heat, about 25 visitors accompanied the first hike, where the director, who has been engaged in the topic of the Mühlviertel Rabbit Hunt for more than a decade, revealed insightful background information.
DATES:
10:30 am – 1 pm Bus departure from the Mauthausen train station

Call Against the Border
Approximately a hundred visitors accompanied the Call Against the Border on July 5th, whose intensive program was developed within workshops by Barbara Holub and Paul Rajacovics with people from the region. “Limiting borders” was one of the guiding principles of the performance, which dealt with the topic of borders from different perspectives. The program received musical supported on both sides of the Danube from the Musikverein St. Nikola and Kohelet.
DATES:
Sun, July 7th | 4:30 pm – 5:30 pm in Mauthausen – Poschacherstraße, OÖ / Enns NÖ

The big closing concert: Together We Walk, Together We Play
The grand finale of the Festival will take place Sunday, consisting of lots of music. The main act BandAdriatica from Southern Italy, will bring its fast-paced mix of Balkan and Italian brass music to the stage – along with Tempi from the Middle East and other new impulses – and will get people dancing. The 8 musicians, considered the “best live act in Italy,” make entire cities dance. In their Sunday concert in Mauthausen, BandAdriatica will draw from an old Southern Italian tradition and will make music in the streets together with local bands and musicians. They invited people to workshops in advance. By snatching music from concert halls and placing it in the streets and public spaces, they are able to reach a broad audience and strengthen a sense of togetherness and belonging. They will be supported by the Upper Austrian band Alpkan, known for their mix of traditional, Alpine sounds and Balkan music.
DATES:
Band parade with pop-up events by Volxfest: Sun, July 7th | 5:30 pm – 10 pm at the Mauthausen Marktplatz
Concert: 8 pm – 9:30 pm at the Heindlkai Mauthausen

Closing party at the Kriegergut!
We look forward to raising our glasses with you in the cheerful atmosphere of the Kriegergut Festival Center.
DATE:
Sun, July 7th, starting at 10 pm

Special: Take advantage of the planned tours this weekend and experience as much as possible in one day! https://fdr.at/programmtouren/